Giraffes are African animal that is known for its long neck and tongue. Giraffes are even toed mammals that can be known as the tallest animals in the world. The shape is somewhat like a camel and somewhat like a goat. The patches are somewhat like that of a leopard and the neck and legs are longer as compared to any of these animals. There are nine subspecies of this species and they generally live in grasslands and woodlands. Here we have bought some interesting facts for you about this animal that will surely leave you overwhelmed. 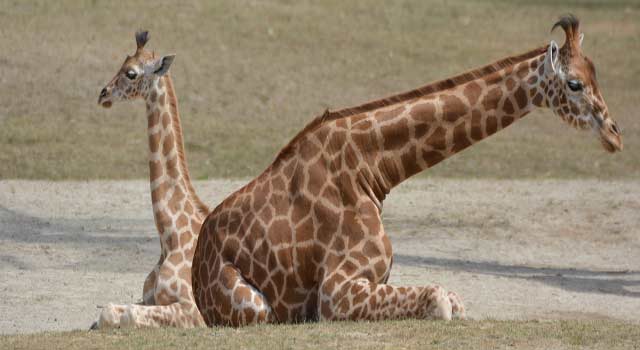 1. Giraffes are herbivores and generally depend on the leaves of plants for feeding themselves. They use their head as a weapon and the tongue as a body cleanser. Giraffes choose to feed on the jungle based tree leaves to satisfy their hunger and their long neck enables them to reach even the high tree tops.

2. The production of young ones takes place when a male giraffe dominates a female giraffe. The young ones are then raised up by the female only. The young ones of this animal are always in a danger of getting hunted by the wild hyenas and lions, wild dogs etc.

Read Also:  How do Lions Attack and Kill their Prey

5. All the types of giraffes have got a horn like formation on their head that is referred to as Ossicones. This part is fused with the skull of giraffe. When a giraffe is galloping, the tail of giraffe gets curled up.

6. In case of sandstorms and danger of ants that a giraffe may come in contact while eating leaves of a tree, The giraffe is able to close the nostrils to protect itself.

7. The skin of a giraffe is grayish in color and there is a unique pattern formed on its skin. The thick skin allows a giraffe to encounter the thorns and bushes easily without getting injured.

8. The high necked giraffes suffer a high rate of mortality that the short necked ones which have got a low mortality rate and that is why they live even longer than the long necked ones.